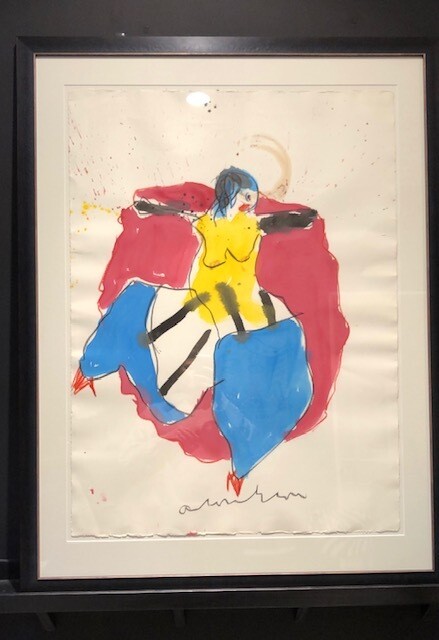 The work is made on Hahnemühle paper and signed by Anton Heyboer. Dimension 99 x 128 cm. Framed

After receiving training as a draughtsman, Heyboer made works consisting of landscape drawings and cartoon illustrations, later creating etching plates that he then sold on to printers. Some of these are directly related to the work of other popular artists, as he created them on commission. In the early war years, he made some illustrations for the Joh. Enschedé company, one of the few Haarlem businesses that was still able to support young artists. From 1950 he was in the SBBK and for his "Contraprestatie", he submitted works regularly. This was a support scheme whereby Anton was dependent on the judgement of the artist-commissioners in the judgement committee, and during the years he was in the program these were Levinus Tollenaar and Mari Andriessen.

In the 1960s, Heyboer's art began to receive international recognition. He was a loyal client of the Galerie Espace and participated in various exhibitions recommended by them. He showed works in the Documenta 2 in 1959, the Documenta 3 (1964), and the Documenta 4 (1969) in Kassel, each in the department of graphic arts. In 1962 he received the Ohara Museum Prize in the 3rd International Biennale of Prints in Tokyo, Japan, and in 1964 the "Accademia Fiorentina delle arte del disegno" of Florence made him "Academico Onorario classe incisione".

On 10 April 2002 Heyboer was awarded the honorary title Ridder in de Orde van Oranje-Nassau. His most valued works are considered to be from his earlier years from the late 1950s, 1960s and 1970s, before he formally broke with the art world.

In 2012 an exhibition of his Haarlem works was to be shown at the Museum de Fundatie in Zwolle, but the museum cancelled because the owner of the works, Couzijn Simon, was unable to show the provenance of the works in a way that satisfied the museum's directors. He claimed to have bought from a "Mr. Bijvoet", a friend of Heyboer. A later comment on this TV interview was given by another gallery owner who claimed that he owned a false Heyboer and that more of Heyboer's contemporaries had had forgeries of their works appearing on the market, and that the reservations about provenance made by the art taxation expert Willem de Winter (of Kunst en Kitsch) were probably correct. In the TV interview it was clear from a short clip of Heyboer at work (from TV archives) that the artist would have been delighted to see such posthumous squabbling occurring among art lovers about his work.

Save this product for later